A Contained Woman: It's All About the Chuni

Most religions include some element of a head covering. Whether it’s gotten lost over time, or translated in different ways to meet contemporary cultural norms, it’s a practice that has endured.  It protects the solar center and, in the case of the Sikh Turban, it draws the energy to the arc line located from ear to ear—our “halo”. As women, there is a practice of covering our second arc line, nipple to nipple, in addition to our halo. And in the same way that the turban or head covering protects the solar center, this second covering protects the projection of the arc line at the heart center.
When I first began wearing a head covering, it was purely for the experience. I was a new teacher of Kundalini Yoga and I didn’t want to ask anything of my students that I hadn’t experienced for myself. I made it 27 days in a row before I couldn’t do it one more day. I wore my hair down that 28th day and I remember the experience to this day!  Let’s just say, it was exhilarating. I took me another few months to make the commitment to wear a head covering every day. But once I did, it was from my own experience, not simply something I was doing because I was supposed to. In the same way, years later, I experimented with the chuni, the covering at the heart center.
I’ve always had a reputation for being a blunt, truth-teller, but I had reached a point in my life that I wanted to change my projection. I wanted to soften. And so I made a commitment to the chuni. At first I was going to wear it for 40 days; then 40 days became 90 and 90 became 120. In the end, I eventually wore it for about 18 months. It brought a grace to my projection, my speech, and my demeanor that I wear even now that I no longer wear the chuni every day.
The chuni is a challenge because, even more than the head covering, it demands a certain grace just to wear it and wear it successfully. Try to keep from tripping on it, closing it in car doors, strangling on it in a hard wind so common here on the plains of Northern New Mexico! I was taught to wear the turban by a young woman who looked like a queen, so radiant, so beautiful. I was taught to wear the chuni by a woman who had served these teachings for 40 years. We were walking around the prakarma in Amritsar on our way to a small gurdwara dedicated to the most devoted female student of Guru Gobind Singh’s. She served him until the very end, when no one else remained.  She did. And so on this warm evening, as we walked together on our way to practice Mere Man Loche, this elder showed me how to wear a chuni properly. Bring the right side across the heart center and drape it over the left shoulder. This covers the heart center and protects and filters the arc line.
But why wear it? Especially when it’s such a pain! The arc line is where we hold things. It is the arc line that contains our relationships. Every man we have ever been with is contained in this arc line—a bit of a frightening prospect for some of us, me included! This same arc line allows us, as mothers, to contain and sense where and what our children are doing: are they safe or not?  When we wear the chuni, we protect this arc line, we give ourselves a container, a grace, in which to move about the world in. And that was my experience. The longer I wore the chuni, the more contained I felt. And over time, I grew more graceful in my speech, in the way I carried myself in the world, and in my approach to conflict.
The chuni can be both a shield and a weapon. If you wear it faithfully, it becomes your container—and you become the epitome of the graceful woman; you become a contained woman.
"If a woman sits with folded hands in her lap for a few minutes every day, and feels she is a container so vast that she contains the whole Universe, she will never feel weak or have any problems. There is nothing beyond woman except God." –© The Teachings of Yogi Bhajan, July 18, 1987 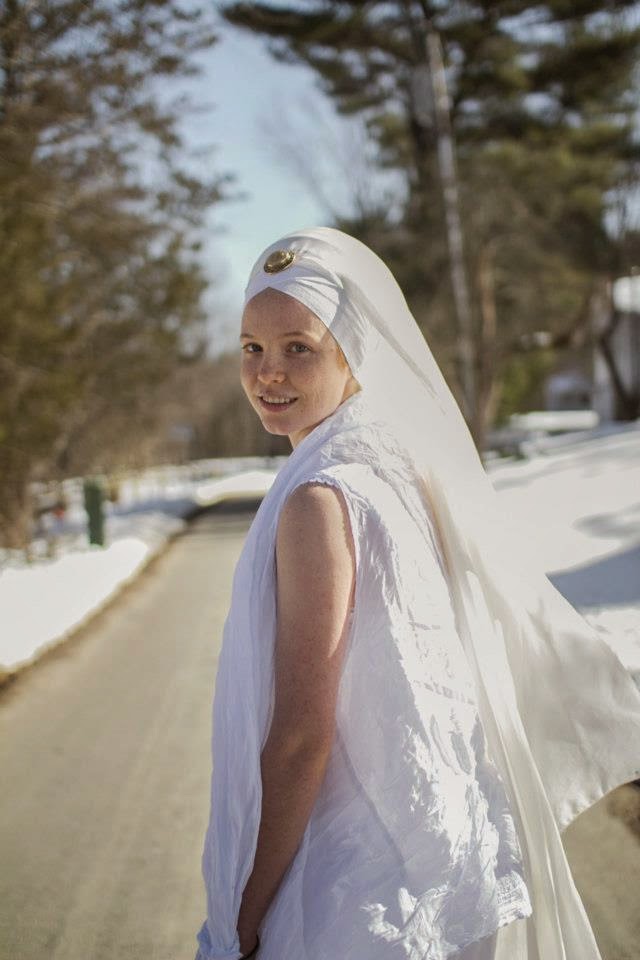 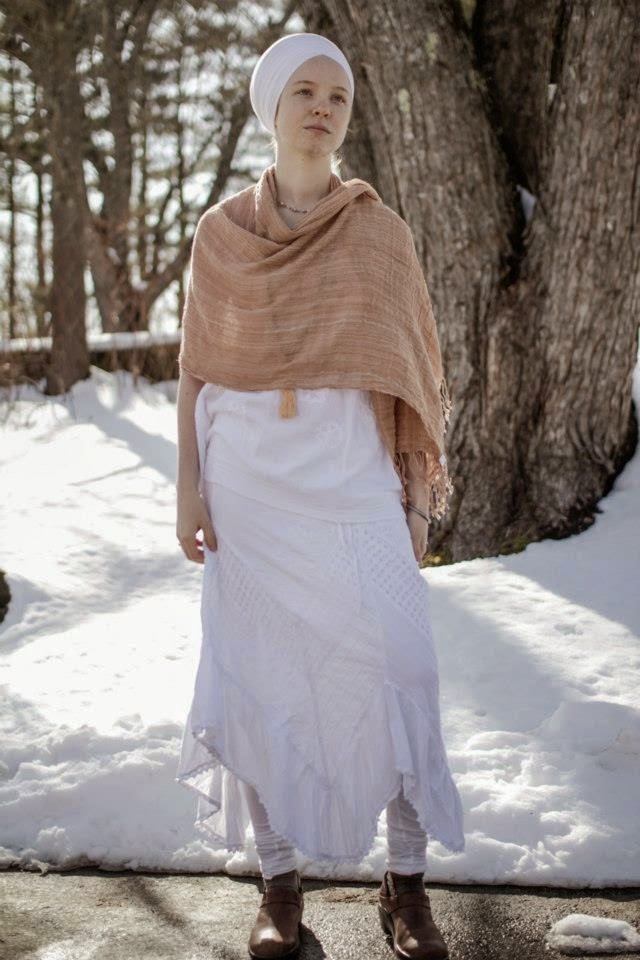 Sat Purkh Kaur Khalsa has been singing for as long as she can remember. Her journey with the sound current began many years ago and doesn’t seem to have an end—instead it has become an infinite quest for the anaahat, or unstruck sound.
A student of sound for more than 20 years, she integrates the Naad into her music, teaching, and healing practices. She has studied with some of the great Sound practitioners in the West: David Hykes, Shanti Shivani, and Pandit Mukesh Desai and is also influenced by the Shabad Guru—the sound current in the Sikh tradition.  Her music focuses on using sound to move the body, the mind and the breath toward powerful transformative experiences that uplift the individual and serve the soul.
A writer, editor, poet, singer and songwriter—and a pretty good cook, too—Sat Purkh is a KRI Certified Kundalini Yoga Instructor and Practitioner as well as a Professional Trainer in the KRI Aquarian Trainer Academy. Sat Purkh joined the KRI staff in 2006 and was instrumental in the development of the Level Two Teacher Training curriculums. Currently she serves as Curriculum Coordinator for The Kundalini Research Institute’s Immersion Level One Teacher Training, offered annually each August. She has five albums of sacred music, Nectar of the Name, Beautiful Day: The Aquarian Sadhana, Queen Be: The Goddess Within, Love & Other Miracles, and Another Beautiful Day: Live Aquarian Sadhana; she is also the author of Everyday Grace: The Art of Being a Woman, an introduction to the Women’s Teachings of Yogi Bhajan. She’s currently completing her sixth album, One: Light, Love, Life. She lives with her husband, Abhai Raj, their two cats, Fatty and Slim, and their dog, Vinnie.

Looking for a chuni? We've got 'em! Another option to wearing a chuni is to wear a scarf or shawl to protect the arc line. Check out our collection at Long Time Sun Apparel. Sat Nam!

Posted by Long Time Sun Apparel at 4:59 AM